I would like to take this unique opportunity to Invite you and your family to the auspicious occasion of my marriage with Sow.R.Vidhya.

Kindly take a little time from your busy schedule to come and wish us on our Wedding, Nalangu and Reception.

Kindly treat this as my personal invitation to come and grace the occasion. 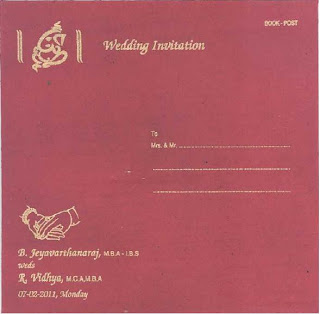 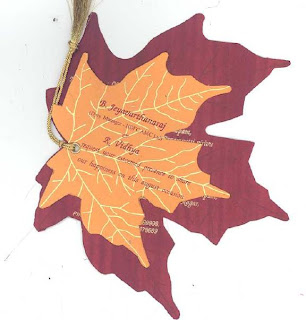 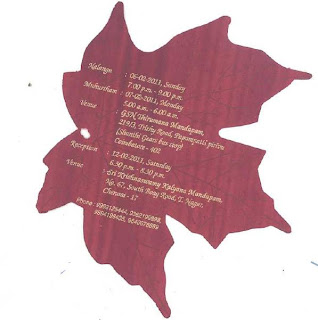 Best way to save a picture

1.Upload it in multiple Online sites as Picasa, Kodak, Orkut, Facebook to name a few.
2.Physical copies of important Snaps, The file size will keep growing OR The Format will keep changing OR Websites will crash OR Our PC/Laptops will crash Etc....... I mean, look at 25 yrs down the line .... So Make a good album of Select few pictures .... it will be there for Centuries.
3.Store it in Cds, Hard disk,etc. But configuration will change, in a few years Hard disk will not be accepted by the New Latest technology Mother board. OR Cds will change to smaller Better version, we will not get a Normal cd player.

Posted by B.Jeyavarthanaraj at 9:58 PM 4 comments:

Posted by B.Jeyavarthanaraj at 6:42 AM No comments:

Where should I start, How can I complete, How can I Describe this in words.

Indian team were consider the under Dogs after World Cup Exit, earlier in 2007. It’s a new team; young team, young captain, they have done the Impossible.

India has bet England, South Africa, Australia and Pakistan in WC Final. It’s really a spectacle, an unbelievable performance, We Indians are very Proud of our New Indian Team. A team without Sachin, Dravid, Ganguly and Kumble. 100% credit to Indian Team, BCCI, Selectors and ICC.

India scored just 157, and put up an easy target for the unbeaten Pakistan team. Indian bowlers were awesome, they controlled the run rate, Took early breaks and kept up to the pressure. Indian won in the last over when only 6 Runs were needed in 4 balls.

What a finish, what a Finish. Nail biting thriller, a typical game of cricket & India–Pak WC cricket.

Recalled all-rounder Irfan Pathan and new-ball bowler Rudra Pratap Singh took three wickets each and Pakistan, who started well, tumbled to 152 all out in reply to India's 5-157.

Misbah ul-Haq threatened to steal victory from India at the death with four sixes in his 43 but Joginder Sharma had him caught trying to spoon a ball over fine leg with three balls to spare.

Opening batsman Imran Nazir had slammed 33 off 14 balls in a flying start for Pakistan but Robin Uthappa ran him out with a direct hit and Pathan claimed the key wickets of Shoaib Malik (8) and Shahid Afridi (0) in his second over to slow their run chase.

Joginder kept his nerve in the final over with Pakistan needing 12 to win and finished with two for 20, while Pathan took three for 16 and Pratap three for 26.
A good all-round bowling performance by Pakistan, led by Umar Gul, had earlier restricted India to a relatively modest total.
Gul took three for 28 in his four overs as India never managed to break free of tight bowling and fielding.

The tall seamer landed the vital wickets of Yuvraj Singh, caught and bowled for 14 off 19 balls, Mahendra Dhoni, bowled for six, and Gautam Gambhir, caught at short fine-leg for 75.

Opener Gambhir batted through the first 18 overs, however, stroking eight fours and two sixes, and needed just 54 balls for his fluent innings which give India's total respectability. Rohit Sharma scored 30 not out in 16 balls in the closing overs to take India past 150

It’s a history, they are not players any more ….. They are Legends.

A true Fan …... who waited for a change, its looks like it, Finally.
Posted by B.Jeyavarthanaraj at 9:43 AM 3 comments:

India is almost in a position to exit from the World cup 2007, Indian Players, BCCI, ICC and Fans are praying for Bermuda to win against Bangladesh.

I don’t know whether it will happen are not, from the TV News channels and Papers the reaction of Fans is very clear. They will never look up to the current cricked team with any pride.

For all the expectation and revenue they earn the performance showed in such a Grand games is very pathetic, all the great (So called Great players) don’t show good performance when it’s most need from them.

Indian performance is very pathetic and awful, Performance by the Batting department, bowling and Fielding departments are very poor. I am sure there is more talent in India, we need to find the mole in the system to Re-define the Indian Cricket team

I will be waiting for the match to end ….. Let’s keep our fingers crossed …… I am sure this world cup will bring a lot of changes to Indian Cricket team, Management and among fans.
Posted by B.Jeyavarthanaraj at 8:57 PM